The Turbo Command Line Interface allows advanced users and administrators to execute, modify, and create Turbo applications in an automated manner. Install the Turbo for Windows to get started.

A container is an instance of a Turbo Application. The new command creates and starts a new container.

The clean image represents a clean OS image. A container is an instance of an image — in other words, you can start up multiple containers that start off in the state specified by a given image. The container holds all of the data and other state changes that occur as the user performs actions in the container.

To create a new container from the clean image, we use the command turbo new clean:

Take a moment to compare the directory listing inside the container from the corresponding listings on your host device. Notice there will likely be many files on the host device that don’t appear in the container command prompt. This is because the container has its own version of the filesystem that reflects the settings of the clean image!

The container still exists even though we exited all processes and it was shut down.

We can restart an existing container using the start command:

Suppose we are done with our container. We can remove it from our local repository using the rm command.

This is especially useful when creating and tearing down test environments or performing other transient tasks where we’d like to leave our host device in a clean state.

We can remove all containers in the local repository using the -a flag:

This restores us to a nice clean desktop!

Creating an empty container is nice, but really we want to run real applications.

While you can install your own applications into containers, many popular applications now such as Mozilla Firefox.

In a few seconds, you will see the Firefox browser window appear!

Take a moment to look at the Start Menu and observe that Firefox has not been installed on the desktop! If you are on a desktop with limited permissions, you may also have noticed that no permissions were required to launch Firefox.

The Turbo.net Hub provides thousands of images for popular applications, runtimes, and layers that will automatically configure and run on demand. You can also publish images into a private repository. Enterprises can deploy and manager an on-premises Turbo Hub with Turbo Server.

In the example above, no version was specified. In this case the container is called evergreen — the latest image version is always run and the container is automatically updated if a new version becomes available. This is a powerful and easy method to keep devices up to date with the latest patches.

We can also run a specific version of an application. To specify an image version, use the : operator:

Because containers are isolated from the host desktop, Turbo can run legacy applications even if newer versions are installed locally or the host is running a newer operating system than the application was originally designed for.

Turbo versions are also based on prefix matching. For example, if versions 8.77 and 8.91 of the jre image exist, then the image specifier jre:8 refers the latest among the versions prefixed with major version 8 — 8.91 in this example. This behavior allows the latest update or patch of a previous major version branch to be applied to an evergreen image.

We can also combine together multiple images into a single container using the layering operator.

For example, suppose we want to run Firefox with the Java runtime enabled: 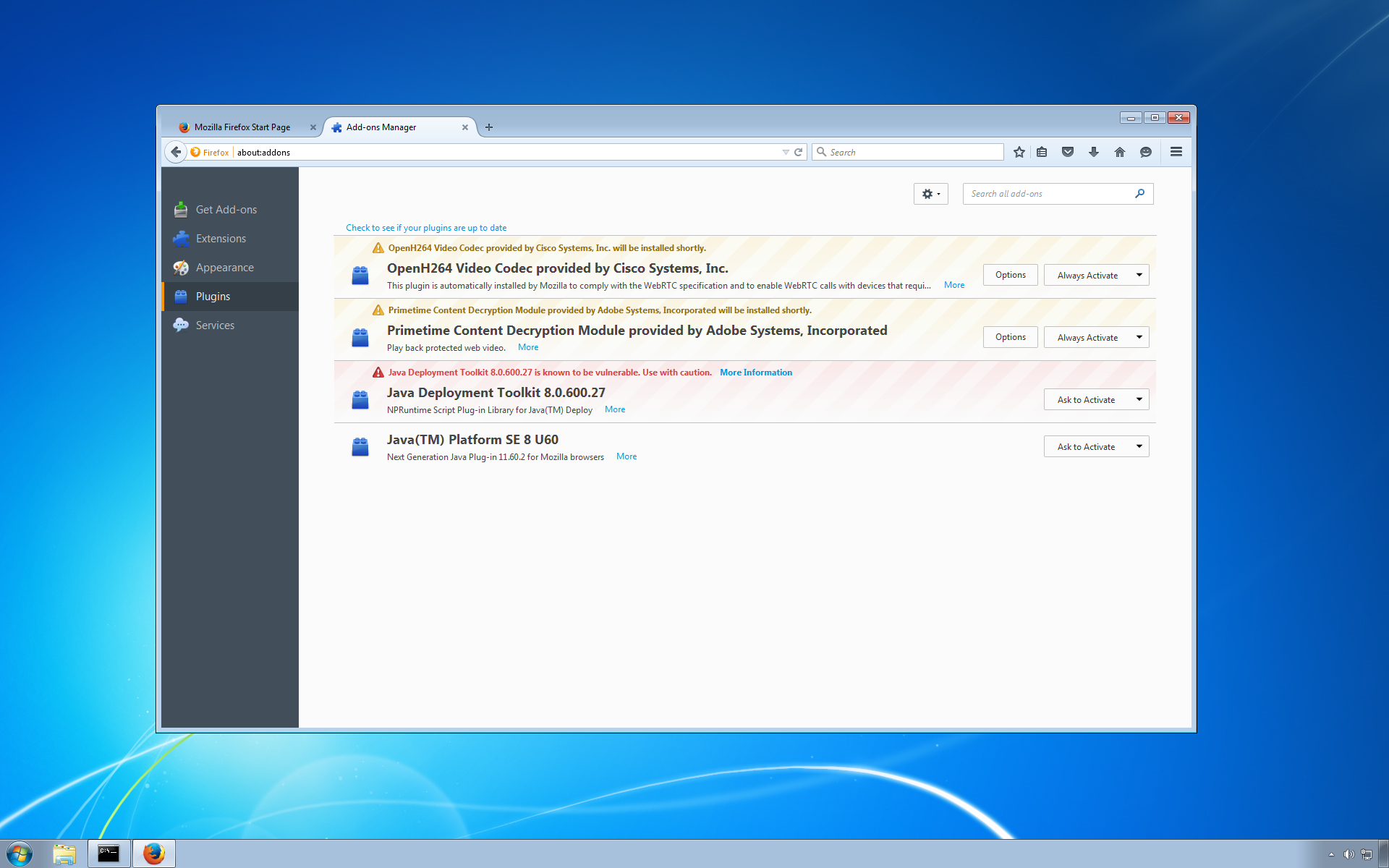 Note that if you navigate to the Options / Plugins menu in Firefox, the Java plugin is installed!

The layering operator applies each image’s configuration on top of the existing container configuration sequentially from left to right.

We can combine the versioning and layering operators to achieve more combinations: 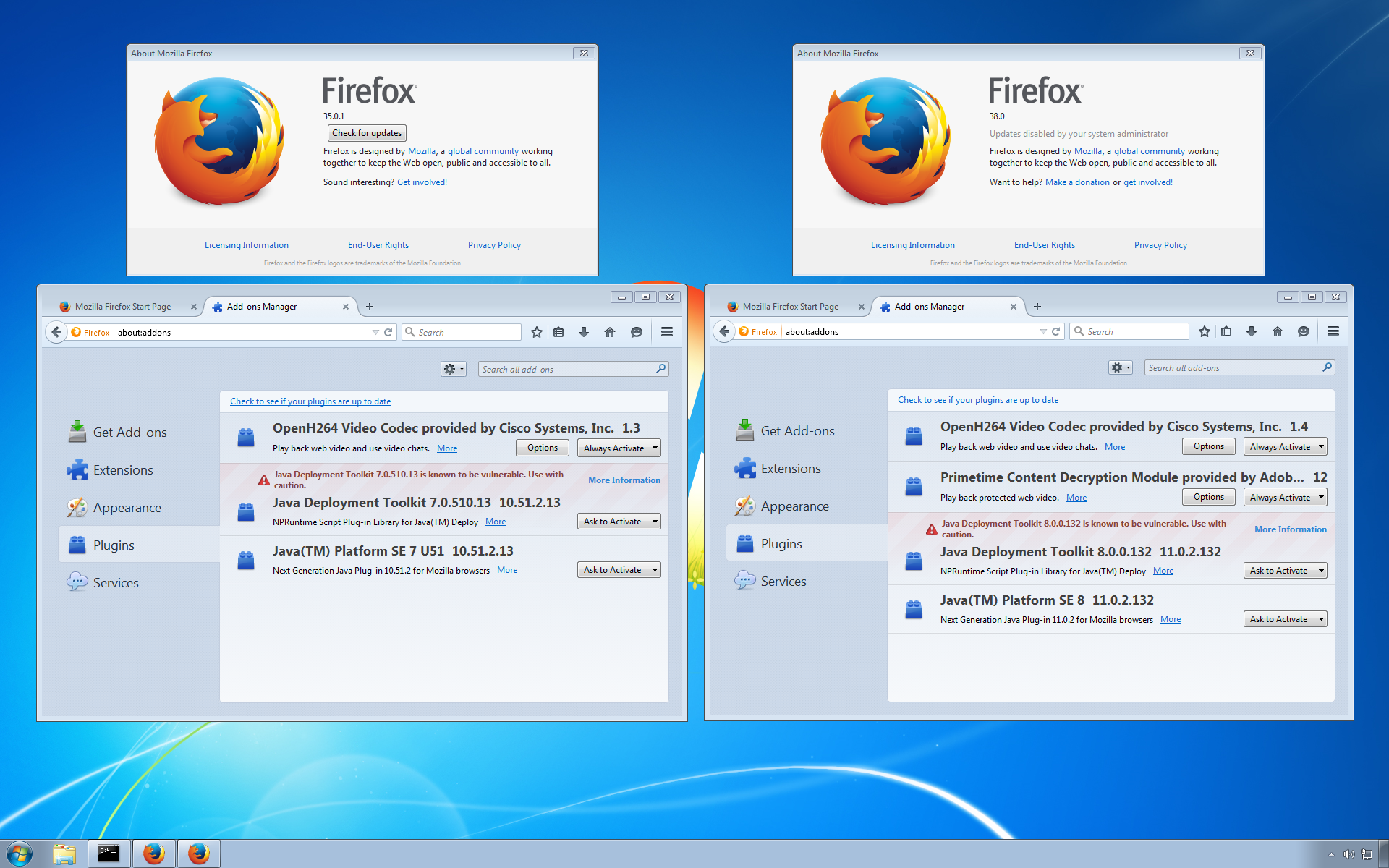 In this example, we used the --detach flag to allow another command to be executed immediately before the container session closed. The default behavior is often preferred when using the turbo command in scripting.

Since detach is a common option, it is also available as a short form argument -d. We’ll use the short form in the future, and also note other frequent commands that have short forms available.